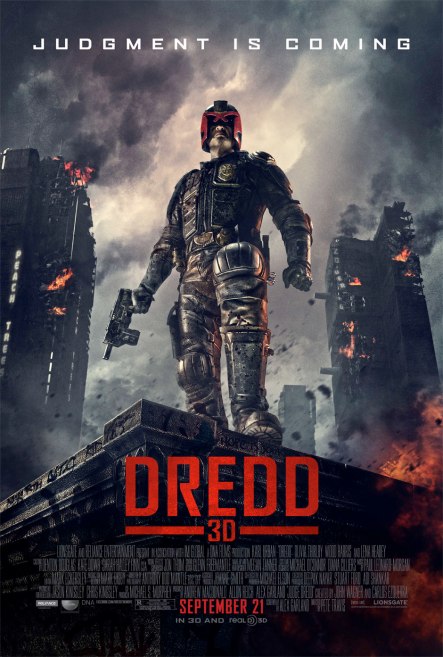 PROS –
1) Mega-City One : The city itself is a central character of the premise.
2) Lena Headey as Madeline “Ma-Ma” Madrigal –  the scar-faced patron of Peach Trees tower block.
3) One day operation story & no time waste on character introduction.
4) This movie can be said as the Godchild of “Escape From NY“. Got an uncanny John Carpenter touch.
5) The Vulcan cannons battle on the 76th floor.

QUOTE –
Judge Dredd: America is an irradiated wasteland. Within it lies a city. Outside the boundary walls, a desert. A cursed earth. Inside the walls, a cursed city, stretching from Boston to Washington D.C. An unbroken concrete landscape. 800 million people living in the ruin of the old world and the mega structures of the new one. Mega blocks. Mega highways. Mega-City One. Convulsing. Choking. Breaking under its own weight. Citizens in fear of the street. The gun. The gang. Only one thing fighting for order in the chaos: the men and women of the Hall of Justice. Juries. Executioners. Judges.